RLI was evaluated in the first randomised controlled trial of an educational intervention designed for children with Down syndrome, and one of the largest of any study of children with Down syndrome to date - funded by the UK Big Lottery Fund. The study was conducted by researchers at Down Syndrome Education International and at The Centre for Reading and Language at the University of York. 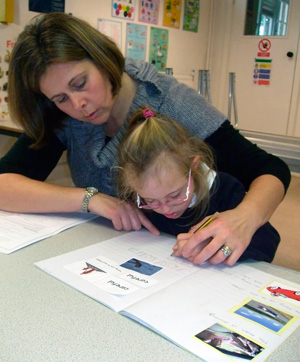 RLI was evaluated in a large randomised controlled trial (RCT). Randomised controlled trials offer a high standard of evidence by evaluating outcomes for participants who are similar to one another at the outset and are randomly assigned to one of two groups - usually an intervention (or 'treatment') group and a control (or 'no treatment' or placebo) group. This study design can give us greater confidence that any differences in outcomes that we observe between the two groups are due to the presence (or absence) of the intervention being evaluated. In our study, the 'treatment' was the reading and language intervention. Our control condition was 'teaching as usual' - the typical reading and language instruction provided to children with Down syndrome included in UK mainstream primary schools with one-to-one support. After the first phase of the study, the initial control group also received the intervention and we continued to evaluate the progress both groups made.

In phase C, the Teaching Assistants took the principles of the intervention and created their own intervention content (within the same session structure), and were not routinely contacted by the research team.

We recruited 57 children with Down syndrome living in two areas of the UK (Yorkshire and Hampshire) to participate in the study. All of the children were attending mainstream primary (elementary) schools and receiving one-to-one support from a Teaching Assistant. A total of 50 schools participated in the study. Any child who was attending and expected to remain in primary school throughout the duration of the study could participate. We excluded no one on the basis of their existing skill levels, and therefore enrolled participants who were broadly representative of the wide range of abilities seen among children with Down syndrome.

Table 2 shows the average scores on receptive and expressive vocabulary and letter-sound knowledge measures at the start of the study (t1), and the range of scores (lowest to highest). The scores are expressed as age equivalents, in the format of years:months.

At the beginning of the project, the average age of the children was 6 years and 11 months, ranging from 5 years 2 months to 10 years. The measures illustrate the extent of their receptive and expressive language delay at this time. The average word reading score is not included in the table as 21 children could not read any words (reading age below 57 months) and 3 children were at ceiling on the standardised measure (reading ages above 92 months).

The children were randomly assigned to two groups after initial assessments. The two groups did not differ on any language or literacy measures.

Of the 57 children recruited, 54 remained in the study through two school years and were assessed at each time point although 4 of these children discontinued the intervention on moving schools during the study. Two other children were lost to the study as they moved schools and one child refused to participate in testing and the school withdrew.

At the start of the study, the Teaching Assistants working children in both the intervention and waiting control group were provided with a two-day training course about meeting the educational needs of children with Down syndrome in inclusive classrooms.

The schools decided when to deliver the intervention each day. For some children it replaced their usual class literacy instruction but for others it was an additional literacy session. For some children the intervention was delivered as one 40-50 minute session, for others the reading and language strands were delivered at different times during the school day. Children were not always supported by the same TA all day and so in some schools one TA delivered the reading strand and another TA delivered the language strand. In other words we took a flexible approach and the schools worked out what was going to be the best way for them to deliver the programme.

We assessed a range of language and literacy skills:

For further information, please select from the following: