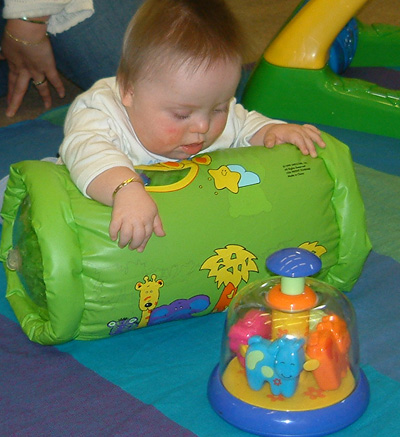 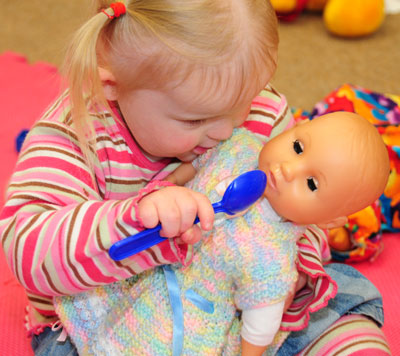 Children with Down syndrome develop motor skills more slowly than many other children. A number of studies have explored their motor development, and a few have begun to evaluate specific physical therapies. It is increasingly recognized that motor skills effect cognitive development. More research is needed to develop and explore effective interventions to improve motor and cognitive development for children with Down syndrome.

Motor development is complex and controlled by the brain. As babies and children move, from early reaching for a toy, to picking up a cup, using a knife, fastening buttons and writing with a pen (fine motor skills needing hand control) and from rolling, to sitting, crawling, standing, walking, running and jumping (gross motor skills needing balance) the brain is learning how to control each movement more quickly, smoothly and precisely. To control any movement, the brain has to process complex incoming information (for example from eyes, from limbs, from vestibular system) and use this to control movements in real time. Over time, the brain stores ever better motor control plans for each movement as the child practices the movement. Children with Down syndrome may have some physical differences in the resting state of their muscles, in the stretchiness of their ligaments at joints and in bone lengths which affect learning to move but the brain learns to accommodate to these and movement increases strength and encourages development in the muscles and in joint function. Improving movement means providing as much opportunity as possible to practice that movement.

Studies of typically developing infants show that rates of motor development are affected by child rearing practices and experience. Research has shown that a 3 week intervention program showing parents ways to stimulate movement in 8 week old infants increases gross motor progress.[ 5] Many studies have shown that the development of reaching and grasping can be influenced in various ways including the use of 'sticky mittens' to give infants the experience of holding objects - again as early as 2-3 months of age.[6] Studies show delays and differences in reaching and grasping in infants with Down syndrome.[7,8] It is increasingly recognized that a child's motor abilities influence all aspects of their development. It is suggested that children's cognitive development is influenced by their ability to begin to reach, grasp and explore objects, to move to explore the world further, to find out how things work, what they can do and to problem solve. It is also suggested that children's fine and gross movement progress influences their language and social development especially as they get mobile, walk and can initiate interaction with others more effectively.[ 9,10]

A number of studies examine the way in which older children or adults with Down syndrome carry out specific movements and describe their movement differences in detail when comparing them with chronologically age matched typically developing individuals.[e.g.11- 13] These studies are difficult to interpret as differences could be due to less movement experience and less opportunity to practice. Training studies are one way to address this and some training studies do show changes in movement patterns for those with Down syndrome towards more typical patterns.[14]

Hypotonia or low tone is mentioned as a causal factor in almost every article on motor development in children or adults with Down syndrome, yet the definition and measurement of hypotonia and its role in movement is not clear.[14] While most infants and toddlers with Down syndrome are offered physiotherapy, little is known about the effectiveness of such therapy. Some research has evaluated specific intervention strategies with infants with Down syndrome and shown that treadmill training and encouraging early kicking can accelerate walking and improve quality of movement information.[14] Research has also begun to investigate the benefits or disadvantages of supports (orthoses).[15] Given the links between movement abilities, cognition, language and social development, some researchers are emphasizing that physical therapy should not simply focus on motor skills but on "how the child uses a motor behavior to explore objects, people and events in social situations because these are the processes through which learning and participation occur."[ 10]