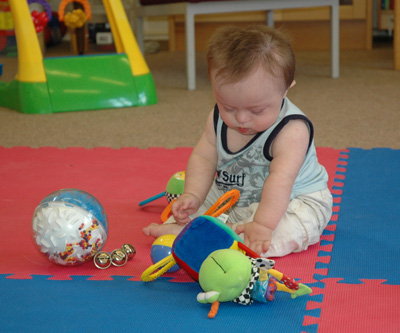 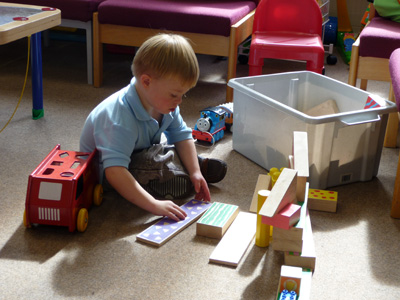 In recent years the role of attention in children's learning has received increasing research interest and also the possibility that training in infancy may improve children's attention. Research into the attention processes of children with Down syndrome (including work supported by DSE) is growing alongside the research with typically developing children and children with other genetically based disabilities such as William's syndrome and fragile X syndrome. The ability to concentrate and stay focussed on a task, to switch attention between tasks, and to inhibit impulsive responding are critical skills for early social and cognitive learning and subsequent academic outcomes.

Attention processes can be measured with questionnaire measures or experimental measures. In one study this research team used questionnaire measures and showed that children with Down syndrome (4-9 years) had higher levels of inattention than typically developing children matched for non-verbal mental age (therefore younger) but not higher levels of oppositional or hyperactive behaviours.[1] They did have higher levels of all these behaviours than same age children, which is relevant for understanding behaviours in inclusive classroom situations. The children with Down syndrome had similar vocabulary comprehension to the non-verbal mental age group. On the reading measures they had better single word reading and letter knowledge and had similar rhyme awareness and phoneme matching abilities.

Higher levels of inattentive behaviours were related to poorer performance on receptive vocabulary, single word reading, letter knowledge and rhyme matching but not phoneme matching. Overall, inattention has the same negative effect language and literacy progress for children with Down syndrome as for typically developing children.

In another study, using experimental measures, this group have looked at younger children with Down syndrome (19 infants and toddlers, mean age 29 months).[2] They reported that in comparison with mental-age matched typically developing toddlers those with Down syndrome showed similar orienting of attention but poorer sustained attention and longer looking times when looking at new items - this may be related to needing more time to process information. The toddlers with Down syndrome showed the same performance on a vocabulary task (looking at an object that did or did not match the name given) as the mental aged matched group but poorer performance on a numerosity task (looking at familiar or new number arrays).

In a study of school age children (2, 3) the same group compared 26 children with Down syndrome (4 to 8 year olds) with groups of typically developing children providing a mental-age comparison and a literacy skills comparison. They used computerised tasks to measure sustained and selective attention processes and explored the links between attention and progress in reading and number over a year.

Training attention in infancy and early childhood is currently a hot topic with some evidence that training may be effective[5, 6] and prominent researchers pointing out that if we intervene very early we may change the patterns of strengths and weaknesses seen later in children with disabilities. The training reviewed is experimental requiring children to engage in computer based tasks. It is also possible that everyday play and teaching tasks may be very effective in improving children's attention processes.