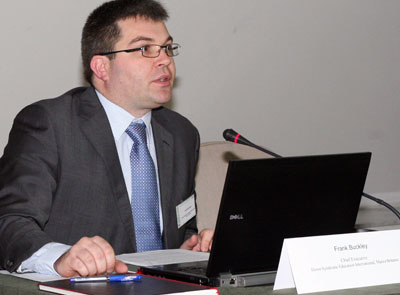 Frank has worked for DSE since 1997 in a variety of operational and financial management roles. During this time he has played a central role in the development and growth of the organisation, helping to establish the charity as a leading international information, services and research provider. He was appointed CEO in 2007.

Frank has also led the development of a successful outreach programme, including securing funding to help the Ukrainian Down Syndrome Organisation to develop and expand. In less than three years, the organisation became established as a major service and information provider serving hundreds of people with Down syndrome and their families throughout Ukraine.

Frank is a regular speaker at major conferences, including Down Syndrome Affiliates in Action annual conference and the National Down Syndrome Congress annual convention. He is a member of the Informed Decision Making Task Force. Frank currently also serves as a Vice-President of the European Down Syndrome Association.

Frank is a Fellow of Royal Society for the encouragement of Arts, Manufactures and Commerce (The RSA), a member of the Institute of Directors and a member of the Association of Chief Executives of Voluntary Organisations.